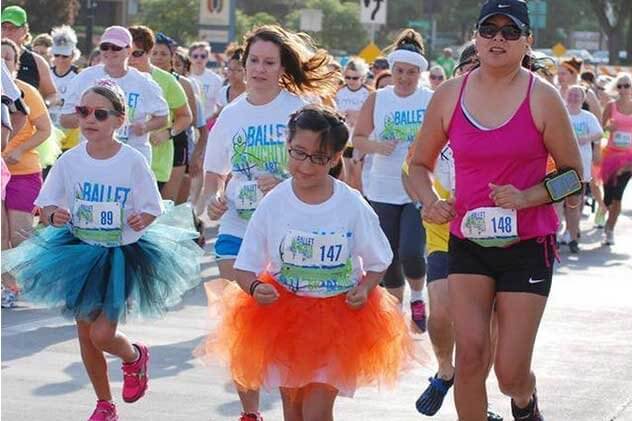 It seems like a dichotomy: the choreographed movement of ballet and the rugged endurance of running. Yet it’s the synergy of motion that inspired Barbara and Mark Chamberlin to inaugurate the first-known ballet art run three years ago.

“Internally, it’s such a departure for us in terms of the fundraisers we’ve done for Ballet Wichita,” said Barbara Chamberlin, the group’s executive director. “Ballet and running might not seem to go together when you first think about it, but once you see it, it really makes perfect sense. It’s been a way to stretch our concept of how we introduce what we do to a new audience. This run brings in new people, and it adds in something fun for people who are already supporting us. It’s a great way to celebrate dance and all of the arts that we’re blessed with in this area.”

Art and athletics will be in tandem for the Ballet Wichita 5K Art Run on Saturday. The race incorporates music, art and dance as runners (often wearing tutus) traverse a scenic downtown route along the Arkansas River that starts and ends at A. Price Woodard Park. Funds raised benefit Ballet Wichita, a nonprofit organization that puts on a series of outdoor ballets each June and a holiday performance of Tchaikovsky’s “The Nutcracker.”

Last year, Lori O’Connell, a Wichita nurse, was new to running. While this race wasn’t her first 5K, she said it was the most unique, memorable and fun one. Part of why she’s eager to run it again this year is the event’s mission.

“I like what the race stands for – supporting the arts. It’s so important to support local arts organizations,” O’Connell said. “Last year when I ran, a good friend of mine from Australia was here, and she works for the ministry of events. She was very intrigued by the race … just amazed that we had this caliber of an event and entertainment in Wichita. We ran the race together and had a marvelous time, enjoying the music along the route.”

Chamberlin said that last year’s numbers were down from the run’s first year in 2012, but she is hoping that 500 or more runners will take part in the event this year. Most of the proceeds come from registration fees. There’s not a set financial goal, though the organization hopes to clear $10,000. She said the event has been well received by her organization and has been greeted with enthusiasm from the community.

A unique aspect of the race is that other arts organizations perform along the route and promote their own art events. Showcasing the different arts groups in Wichita is a key component to the event, and Chamberlin said the organizing committee works hard to get as many groups to participate as possible.

The post-run public art project is also a popular element, in which the runners get to be part of a large-scale creation. This year, a new “silk village” will await them at the finish line. Registered participants can leave their marks along swaths of stretched silk that will later be made into scarves and other wearable apparel.

“A lot of people who are drawn to this event are younger professionals looking for an organization to get involved with,” Chamberlin said. “They can get exposed to a variety of art organizations at this event. When the arts come together, we all do better.”

Chamberlain noted that the scenery along the route also draws people and motivates runners.

“It spotlights the best scenery in Wichita,” she said. “It goes by the Mid-America All Indian Center, Exploration Place, the Keeper of the Plains, all the beautiful bridges, WaterWalk, all those beautiful things. It’s a wonderful snapshot and a panorama of our downtown. It’s everything here that is iconic.”

O’Connell said that the race is a good one for new runners because it can be walked or run.

“It’s a great place to get started, and if you’re in good health, it’s a great way to enjoy running while supporting the arts,” she said. “The post-run party is so much fun, too, with delicious food and great music. I also love the public art creation. … It’s so neat to be part of making art on that scale. From how the race is mapped out to the entertainment along the race to the after-race festivities, it’s a good time.”