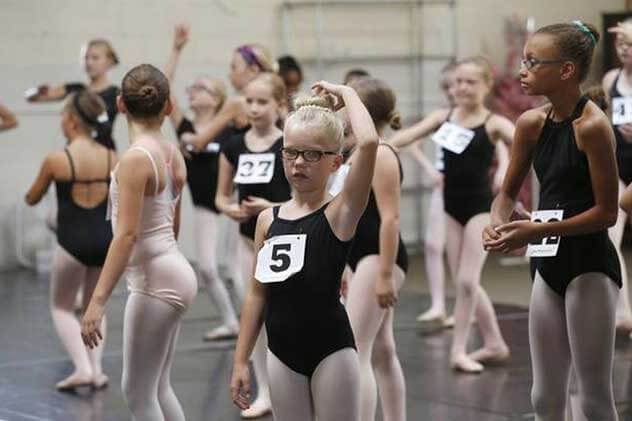 On one of the hottest days of the summer, more than 100 people were already thinking about December, sugar plums and dancing mice.

Dancers 8 and older showed up at the Ballet Wichita dance studio on West Douglas. They came in leotards, dance shoes and had their hair secured tight, ready to dance their way into snowflake history.

Shortly after 2 p.m., there was a happy, noisy, chaotic frenzy among the largely female gathering.

“One of the male dancers just brought in three other male dancers,” said Barbara Chamberlin, executive director of Ballet Wichita. “This is big. This is BIG. And they all look like they can lift.”

And, indeed, one of those male dancers, Remmington Phillips, looked quite strong.

At 25, Phillips has been performing in the ballet for the past decade. He is a Wichita State University senior majoring in dance.

“I started dancing in junior high – I was actually playing baseball. It was kind of ‘you have to do something to stay active,’ and it became the mandatory PE (physical education) program,” Phillips said. “Now, this is what I do.”

The ballet appeals to him, he said, because it requires dancers to be athletic.

“I have always loved sports in athleticism, but at the same time, I like a team environment,” Phillips said. “This gives you both. It is very technical but very athletic. Working in a company environment is unique: You have different ranking systems like you would in a job or military. But if everybody doesn’t work together and you get an attitude, the whole thing can fall apart. Ballet Wichita is unique in that we work dancers anywhere from 8 years old to 80 years old, anywhere from a couple of years’ basic dance training to professional.”

In past years in “The Nutcracker,” he has been a carriage rat, the Nutcracker, a party parent and a snow flurry. This year, he is not choosy about the role he plays.

“This year, I’m doing so much at school, I only have a few rehearsal days, but I knew they were short some guys,” he said. “ ‘Nutcracker’ is one of those things in that it is traditional. The base role for an adult guy is a party parent – it is fun, you can play it up with ballroom dancing. At the same time, it is still fun to dance the really complicated roles, and you get the glory of getting to be onstage and taking your bow at the end of the show.”

On Sunday afternoon, Elleann Kohl was busy stretching and performing dance moves while she waited to audition. The 14-year-old is a freshman at Maize High School. She has performed in “The Nutcracker” since she was 8.

The fully costumed production will run Dec. 11-14 at Century II Concert Hall. The performances are usually sold out, Chamberlin said.

Tickets will go on sale in October.