Meet the Girls Who Will Dance as Clara 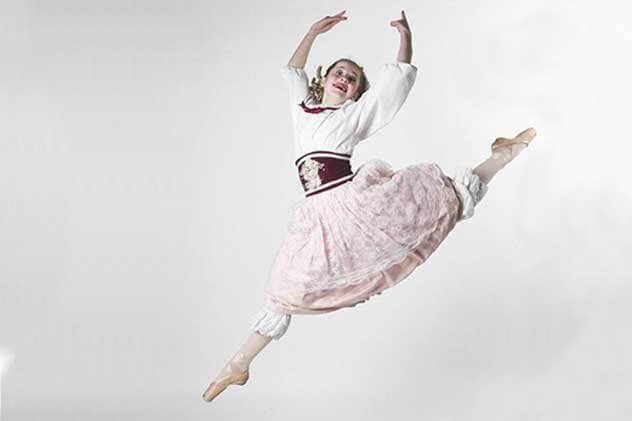 If you’re a little girl taking ballet class in Wichita, December arrives with one dream.

But each year, only three young dancers are chosen to perform the coveted role in “The Nutcracker.”

“Nutcracker” season starts in Wichita on Friday, Dec. 9, when Friends University will stage the first of its six performances over two weekends. Ballet Wichita follows with three performances at Century II scheduled for Dec. 16-18.

The competing ballets take two different approaches to the role of Clara, the little girl who fights with her kid brother over a nutcracker toy at a Christmas party, then falls asleep and dreams of a world filled with her toy come to life and a cast of dancing sweets.

The Friends ballet, directed by longtime Friends University ballet director Stan Rogers, casts one girl to play Clara each year. Rogers prefers to cast younger girls who have a childlike look, and his Clara does not dance en pointe.

This year’s three Claras, though, all have a few things in common. When they’re not dancing, they’re typical teens and pre-teens who love giggling with their friends, reading and watching television.

Here’s a brief introduction to the three lucky and talented Wichita girls chosen to be Clara this year.

Trivia: This is Karissa’s second consecutive year dancing the role of Clara.

How did you get the role of Clara? “I wanted to be Clara when I first auditioned, but I was too young. I was excited that I got to be a ginger cookie and I waited and auditioned again and got Clara.”

How did you find out you got the role? “My mom found the letter in the mail, and I opened it. When I saw I got Clara, I was really excited. I don’t remember what I did.” (“I remember what you did,” her mother, Mary Jo, says with a laugh. “You squealed and jumped on my furniture.”)

What dance do you like best in “The Nutcracker”? “The party scene because it’s so exciting and the lights are really bright. It’s just so fun.”

What’s your favorite part to dance as Clara? “I like the battle scene. There’s a lot of acting, and I like acting, too.”

In what ways are you like Clara? “I get excited about a lot of stuff easily. And we both have little brothers who don’t behave that well and annoy us.”

What do you like to do when you’re not dancing? “I like to read, and I also like to play games on my phone and play board games. I also like cooking and baking, and I play the clarinet.”

School: Eighth-grader at Northfield School of the Liberal Arts, Wichita

How did you get the role of Clara? “I’ve been training for 11 years, and I have been in ‘The Nutcracker’ seven times, so I’ve kind of really worked up to it.”

What other roles have you danced in ‘The Nutcracker’? “I’ve been a ginger cookie, a mouse, and a party child in my former school. I was also the lamb, a solo, with Ballet Wichita.”

How long have you wanted to be Clara? “Ever since I’ve been dancing, but I’ve really been passionate about getting to do it for the past three years. It feels really good, but now I have other goals, like, eventually to be other higher-ranked solo parts in ‘The Nutcracker.’ ”

What non-Clara dance do you like best in “The Nutcracker”? “In general, I like the Russian dance because it’s really fun and high-energy, and it’s not really traditional.”

What’s your favorite part to dance as Clara? “I think that would be a scene called the ‘Dream Scene,’ where you get lifted a lot and it’s really whimsical.”

What do you do in your free time? “I play the flute, and I used to play piano, so I can do that too. I like reading and I like knitting, because I’m an old lady at heart. And I like hanging out with my friends. We make movies (on iMovie). We dance – we make dances to songs and we do karaoke a lot. And we watch ‘Gilmore Girls.’ ”

Trivia: This is Emma’s second consecutive year dancing the role of Clara. When she was 10, she appeared as Cosette in Music Theatre Wichita’s production of “Les Miserables.”

How did you get the role of Clara? “I’ve been dancing since I was 3 years old. I had friends who did ‘The Nutcracker,’ and I heard about it a lot. I was 8 when I first tried out.”

What other roles have you danced in “The Nutcracker”? “I’ve been a mouse twice, then the next year I was a ginger cookie but I broke my foot and didn’t get to do it that year. I skipped a year, then last year I auditioned again and I got Clara. Then I got it again this year.”

What non-Clara dance do you like best in “The Nutcracker”? “I really like watching snow. The Snow Queen part is really cool. I like how everyone’s dancing in different lines it and looks chaotic but really good at the same time.”

In what ways are you like Clara? “I guess we both have big imaginations. I can totally see myself dancing with my toy and sneaking downstairs to the living room trying to find it. I fight with my siblings, too, but only sometimes.”

What do you like to do when you’re not dancing? “I like to read a lot. I like fantasy and magical things. I also do theater with my high school. I got into my first high school musical this year and was in the chorus.”