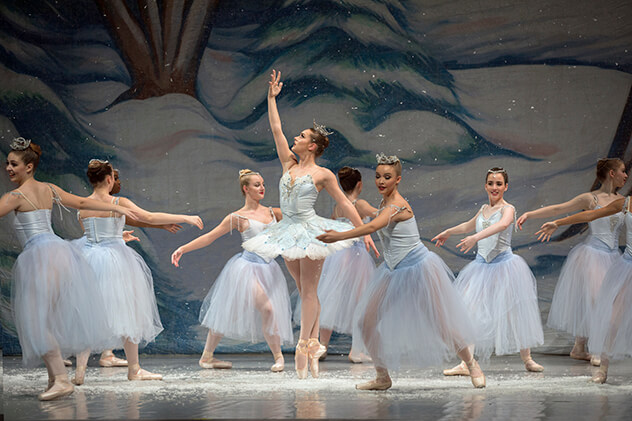 For over 40 years, Ballet Wichita Theatre has performed “The Nutcracker” every Christmas season. While attending the show has become a tradition for many, junior Camille Pierce’s tradition has been dancing in it for the past eight years.

But this year, the tradition changed slightly with the arrival of director and choreographer Sean McLeod and guest artistic director Karen Brown.

“The choreographer and director, Sean McLeod, created ‘The New Nutcracker’, and he altered the story to where it was more about love and cultural appreciation and magic,” Pierce said. “The choreography wasn’t as classical ballet as the traditional Nutcracker would be.”

Although Pierce also enjoyed the changes, she was unsure how the audience would respond.

“A lot of people would come to our show as a tradition so I was worried that people wouldn’t accept all the differences, but it was also fun doing something new and seeing things in a new perspective,” Pierce said.

Pierce was cast as soldier, Mirliton, and dancer in the snow ensemble. Roe was initially cast as a soldier, but later become part of the angels and ginger cookies, too.

“This year was my first year in snow — although I was only in a small part of it — but it was super exciting because it’s one of the highest parts you can get as a core member, so that was fun,” Pierce said.

Roe added: “Later on throughout the season Mr. Sean watches you and looks for how much you have developed as a character and a dancer.”

“I’ve been both Mirliton and soldier in the past, but Mirliton was more challenging and advanced in this production, and it used to be pretty intermediate,” Pierce said.

Like the dancers, the orchestra also adjusted to changes.

This year, Derby orchestra teacher Dr. Wesley DeSpain conducted his first ballet orchestra for “The Nutcracker.” Playing clarinet in the ballet orchestra from 1996 to 2016, DeSpain was offered the position after the retiring conductor asked if he was interested.

“Working with an orchestra is a very unique experience because the conductor must know the music intimately, be able to lead and follow, and be able to make split-second musical decisions,” DeSpain said. “It can be a little bit unnerving, knowing that people on stage, in the orchestra, and in the audience are depending on the conductor to make good decisions.”

Throughout the rehearsals, dancers and orchestra members alike spent many hours practicing.

“Rehearsals were fun because everyone learned every part, so it was like I was constantly dancing, and I won’t lie, it was extremely physically draining and I never had time to do any homework, so it made me very stressed at times but honestly, it was still enjoyable,” Pierce said.

DeSpain was impressed by the dancers’ commitment — one of his favorite parts was seeing the Derby students practicing.

“When I went to several ballet rehearsals — apart from the ones with the orchestra — I was impressed and encouraged by the dedication of the dancers,” DeSpain said. “I came away with a new appreciation for what the dancers do, how strenuous it is, how strongly they support one another, and how much time and energy is required.”

After long rehearsals, both dancers and orchestra members were excited to perform.

On Dec. 10, 2017 the production traveled to Junction City for its first performance, and then had two student matinees each at the Century II Concert Hall on Dec. 12-13, 2017. Those performances only had recorded music.

“It’s always kind of fun to be with your dance friends and perform when usually you’d be at school; it’s just exciting for some reason even though deep down we’re all freaking out and stressing because we know finals are coming up,” Pierce said.

But dancing to live music meant the orchestra needed to complement the dancers’ movements.

“The biggest challenge conducting the ballet orchestra was coordinating the tempo and rhythm of the music in the orchestra pit with the dance movements on stage above me,” DeSpain said.

With each performance, DeSpain worked to improve the quality of his conducting.

“There were things that ‘went wrong’ at each performance, but, since we are all human, that is the reality of it,” DeSpain said. “The issue is not if mistakes will occur, but whether or not we can adapt when they occur and keep going as if a mistake never happened. Mistakes are just lessons in disguise.”

Taking each lesson to heart, both dancers and orchestra members improved.

“Sean really taught me personally how to be more confident in my dancing and that even if I’m not as amazing as the person next to me, that I’m still improving and I’m still getting better,” Pierce said.

With “The Nutcracker” wrapped up, the Derby students and DeSpain cherished the memories they have working on the production. Pierce loved the increased involvement from Derby.

“Usually not a lot of people from Derby are included in the Nutcracker, so it’s really nice that more of us are getting more included in it,” Pierce said.

DeSpain hopes to conduct future performances of “The Nutcracker.”

“When I get to work with people who are really good at what they do, it inspires me,” DeSpain said. “It makes me better and it makes me want to be better for others so that they can be inspired, too. Inspiration provides us with the motivation to make progress.”